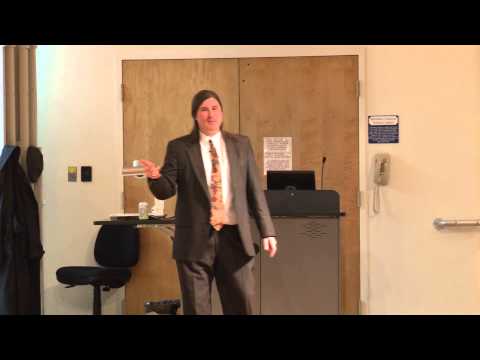 Probably the most important social context initially is the family system in which they find themselves It doesn't have to be a biological family necessarily but there's a family system There's that hopeful attachment were looking for Hopefully it is it's a solid attachment, it's a secure attachment but there's nobody thats fated one way or the other early on, but we're in that context of a family system Well, parenting can be done in very very different ways

You may have seen parents of your own fight or debate about what to do over any given idea that kid is dealing with at any given moment because one sees it one way one sees another way, and they have to negotiate through that to come up with a solution with the kid So these are styles of parenting and they shouldn't be taken as end-all be-all etched in stone It's not that somebody is completely one and not any of the other because they, people are far more complex than that But it gives you an overview of how people could parent and how they typically do parent The first is authoritarian

So that's one way to do it but communication is not valued communication between parent and child is poor right because the kid is not allowed to question the kid will not know the rationale behind There may be very good reasons behind the boundaries or the rules but the kid isn't going be privy to that because the kid not privy to the discussion about that So in the sense that authoritarian and and authoritative sound very much alike, authoritative I've got asterisk because it seems to be the best style overall The difference here is the way that you communicate There are still rules there are still boundaries right

The parent is still in charge, but the rules and the boundaries will be explained to the child an age-appropriate fashions right? So if you're talking to a three-year-old you don't talk in social contract theory language right? you talk to them "well, this is something I don't want you to do because it's dangerous I don't want you to get hurt therefore I won't let you do it" Well they can understand that now there's a reason why there's a rule and that helps them develop more complex thinking about why things are in their world Well they get older now rules can become more negotiable So you can have a kid who says like in teen years that "well I wanna stay out till 12 all my friends stay out til twelve

" And the parent goes "well, you ain't staying out til twelve cause you're in ninth grade for example and I don't know that it's true that all your friends stay out until 12 and if it is true I'm not sure I agree with what they're doing and homes that they're coming from Everybody could be different, that's fine and well but let's try 10 o'clock And if you do ten o'clock reliably and regularly, and you don't violate our rule I might consider 10:30 but we ain't going all the way to where you want to go, and if you mess up ten, 10:30 ain't coming and we revert back to 930" So now we have a negotiation right which allows the kids to assert their will, assert their independence, and assert their communication skills to try and persuade a parent who may or may not be receptive, to the persuasion but would explain why the rule is in place or why it's being modified or how you would test or how you would change it Now the benefits seem to be positive by and large cognitive benefits, social development, these kids tend to be independent, tend to be happy, tend to be self reliant, and tend to be academically successful more so than the other three styles

On average, no guarantees for individuals, and recognizing that those are especially self-reliants and independents western-style values So we talk about independent-minded being something valued in America, we want people to be independent, well there are interdependent cultures where it is a real goal to be very closely aligned, and closely tied, and to divine oneself by one's relationships with other people, especially family members, but also work colleagues, maybe people you go to church with, or the people you you are hang out with in life right? So, that's what you produce and in this society that's valued, so therefore that's good in this context, but context is important Now the way I help people remember this is authoritarian sounds like Aryan nation that Hitler wanted Hitler was a dictator so that helps me remember that that one is dictatorial right, and if that one's the dictatorial one, then the other ones the good one Make sense? Aryan, -itative, -itative sounds kinda fun but not that fun to you still got it authority built in right? Fun authority, Authoritative

Permissive parents make very few demands on their children, and are overly responsive to their children, those are your spoiled children whose parents not only indulge them, but sometimes go out of their way to encourage them to express themselves and get whatever they think they need or want It's not a bad thing per se but what it teaches essentially is that you should have everything you want, and you won't have any experience of denial of needs or wants, then you have a kid that's going to have a hard time in the social order of things because they're not going always get their way in reality, so in a sense you're setting them up to have conflict later So these kids oftentimes we'll find them in child's (stutters) children of divorce, the non-custodial parent doesn't want to be the bad guy I only get to see him so this little bit of time I don't want to be the bad guy I want them have to have a good time so you might see that the rules change and the parenting styles change from one household to the other, if you've got multiple households in which kid may live or or at least visit Grandparents may be very permissive, but then mom or dad might be authoritative, or authoritarian, so you see that multiple people are actually coming together here you are not just getting one style, but you tend to get a blend of styles, and that's not a bad thing necessarily

Because you get an experience of different types and different situations The uninvolved parent minimizes the emotional contact with the child The univolved parent seems to not need that bond, seems to be not rewarded with a a close emotional tie with the kid they provide the food, they provide the clothes, and that's what they do, they provide for the material needs of the child but they're not really invested in the child in a way that is an emotional connection So with little emotional involvement you've got a lot of distance issues here people who don't get that from their parent can sometimes feel alienated and feel like they can't please somebody, because the person seems unpleaseable but that's not necessarily a reflection of the child more than the parents style, but you can see where people start to develop self esteem, self efficacy, self understanding is through these initial interactions Now like I said you probably know somebody in each of these categories thats mostly that as a parent right? For me when I started out with my daughter who was nine, when she moved into my house I married her Mom, I then adopted her, I was probably more authoritarian then

I was looking out for her safety And I was very invested in the child but I told her what it was going to be, and she was going to do it because I said to do it Now being a verbal person I'd talk about it, but weren't negotiating a whole lot I go through my community college years, my graduate school years and now I raise my other kid more authoritative There is lot more negotiation, a lot more debate, I allowed both of them to argue with me because I wanted them both to have this sense of asserting themselves but there's a line you don't cross

And when they across it I put him in check Now as adults they have appropriate assertiveness, but they're not offensive or obnoxious And they learned that they have the ability to change their circumstances because they can negotiate My daughter got more of that towards her later teen years and he got it kinda most of his years because they're twelve years apart So it's an interesting thing, it's not static, life is not static, you can change who you are if you have the motivation to do so