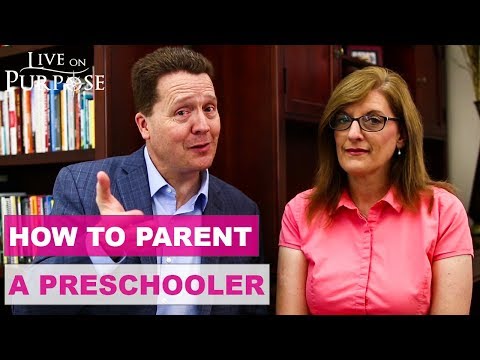 You're enjoying these parenting videos at Live on Purpose TV? But you're looking for some positive parenting tips for preschoolers? You're in luck Different stages of development require a little different approach to our parenting

It's simply their development has them thinking in ways that are typical for for them Right But at a later stage of development, we would hope that we would be less self-centered Preschoolers tend to be in that phase down Preschoolers also have a developmental process going on in their communication

Yes Now, you know a lot about this, Vicki because you work with kids in the schools Around speech issues and language development Yeah, kids are really learning the nuances of language They're not only learning the words but they've been studying all of the body language that comes with that

And they're really starting to get it but they don't fully understand it yet So, they have to pick up different cues from their parents or from others in their environment about what it means if your face looks like this Or the subtleties that that we come by naturally as adults But our kids don't necessarily And you know, I have to say, children at this age, Preschoolers do not understand sarcasm for the most part

Yes Thank you for bringing that up because as a parent, sometimes it seems so clear to us that we're being sarcastic We don't mean whatever we said Right But they tend to be more concrete, more literal

So, we have to be careful with that There's a couple of things that we can do as parents to improve our efficiency or our influence With our preschoolers and the first thing comes to my mind has to do with the communication Okay We want to turn our words from garbage into gold

Now, what does that mean? If you noticed sometimes that when you're speaking, it's like your words are just garbage They're just It's like, there is no connection there

I know, I used to say, I'm not talking just to hear my own voice Right But sometimes we are Yeah So, how do we turn our words from garbage into gold? Going back to what we already talked about in terms of the development of a preschooler

Remember they tend to be very concrete They're at a level of moral development where they tend to look to externalized sources to understand what's going on And so, basically what that comes down to is that our words get to be paired with consequences Both positive and negative Right

So, that what we say is actually predictive of what they're going to experience Right And this is so important with Preschoolers Now, remember we talked about there's not a lot of understanding of delayed gratification And they are so self-centered so when they're wanting to do something they're not aware of what everything else that's going around them

They just want what they want at the moment So, one of the ways to change your words from garbage into gold is use physical proximity when you're working with Preschoolers And you're setting up a request for a particular behavior If you are close to them and you say, "Please, put on your shoes" and they don't, you're they're physically close enough to them to now make it happen Which shows the child you're going to ,do you're going to respond, you're going to give the consequence first time

You know, one of the hardest time things we go through with parents are with preschooling them One of the biggest challenges we have with Preschoolers, same with parents of Preschoolers they say, "How do I get my kid to listen the first time?" And with this preschoolers, that proximity is one of the biggest things You've got to be right there near them when you ask, when you give them a request If you're across the room or if you're worse, yelling at them from across the room, it's really easy to ignore you And just keep doing their own thing

And it teaches them something that we really don't want to teach them And that is "you should listen when I yell" See, it's a training process But what you're saying Vicki is that you get a close proximity So, you come over into that child's space

You make sure that you have their attention And attention is an important thing Because they're probably doing something else at the moment They're interested in all kinds of things and they're bouncing from this to that So, sometimes, even with a young child, you get a hold of their shoulders or their face so that they're looking at you

You get their attention Get some eye contact, so physical proximity, close attention This is a cue now for the child that what's about to be said is gold Right Now, another tip for parenting with preschoolers is to use two choices

So, you've gotten yourself in close to the child, you're ready, you've got their attention Give them 2 choices of something they can do And there are some caveats about those 2 choices So, do you want to talk about that? Yes This is huge because here's the thing and this goes for kids of older ages, too

They pick the "not okay" How do the do this? And you control one of them Here's why You give them two choices You're okay with both of them, they choose door number 3, right? They want another option

They don't want to go with the 2 things that you gave them Well, if you control one of those two choices, then that one becomes default So, when they choose something else, you go, "Okay, we're going back to the default" That means you chose the default Let's give an example for our parents

So, we're talking preschoolers, right? Let's say that you want to go to the store and it's time now to go, alright? So, the two choices might be, "Sweetie, would you rather go get in the car on your own 2 feet or would you rather go on daddy's feet?" Alright, I'm okay with either one, really Because they're going to get in the car What do they want to do? They want to choose door number 3 where, "Well, I'm not going to go right now, I'm playing, I'm doing something else" right? They're dragging their feet So, when you control this, I'll put you in your car seat Either you can get in by yourself or I'll put you in That's Well, that's default And then you can phrase it in terms of, "Hey, sweetie, would you rather get in the car on your own or have daddy put you in the car? Because we're leaving in just 3 minutes" or whatever, right? You set it up that way Would you rather And you're giving them a chance now to experience appropriate control Not appropriate for that child to control your schedule and your mood and everything that goes on in your life They're just little And that kind of control is inappropriate because it gives them this power rush that has been wanting to engage in power struggles with you So, you're showing them, "Look, here are your choices you can do this, you can do that

I'm okay with either one" Alright? But you control one of them That one becomes default No matter what age your kids are, I think it's really important to understand the three stages of moral development So, we're talking stage not age

And there's some other videos here on the channel In fact, if you'll go check out the one that is about positive parenting, you're going to see what we're talking about with those 3 stages Basically, stage 1 is the least mature Vicki, when we started this video, you you pointed out that they're at a stage of development where it's typical for them to be very self-centered Tantrums, manipulative

Manipulation, fighting, screaming, yelling Those kinds of things are so common for young kids Now, older kids do this, too But this is what we call stage 1 of moral development Where they're really self-centered

Now, when they move to stage 2, they stop fighting and start cooperating more Right In fact, that's kind of the dividing line RIght, cooperation Between stage 1 and stage 2

You know, when you tell your two-year-old pick up their toys and they pick them up, oh they're cooperating that's fantastic everyone is happier Right, and when they move to that stage, we as parents back off on the control a little bit and we allow them to have more control Because now they're mature enough to handle it appropriately And then there's stage 3 which probably your preschoolers not going to be in stage 3 You'll see little glimmers

You'll see little brilliance breaking through, occasionally But stage 3 is where they're truly responsible and they show initiative and you don't have to ask them and they just see what needs to be done and they do it Can you see that this is not typical of a preschooler The whole point is, as a parent, you come to understand those stages of development in our positive parenting audio course We've got several segments that deal with each of those 3 stages

And so, we'll refer you to that for some of the details But just understand that being aware of those stages as a parent and then meeting your kids at an appropriate level of development Right Stage not age It's what we talked about

Another tip that's really helpful with preschoolers is to catch them doing good things and give lots of positive reinforcement You know, with our toddlers and our preschoolers, they're so often that we have to sell a lot of limits for their safety Because they don't understand ramifications and full consequences out there in the world Right, so we're often telling them no or or putting limits on them or stopping them or tell him how they can't do something or not to do something And I think it's really important to parenting the find ways to catch them doing the positive and then reinforce it

Oh, good job, nice, whatever, right? Like, you used your words We're going to celebrate these little victories with them Because to use their words instead of hitting to get something that they want, for example That's exactly what we're looking for So, as you catch them doing that, you give them that positive

You've heard right That kids will do things for attention They're going to go for attention positive or negative Or negative, right Bad breath is better than no breath at all

Yeah So, we want to shower them with all kinds of positive attention for the things that they're doing well And then as we conclude this particular segment Stay, calm Breathe, right? Stay calm and parent on

We should make t-shirt Stay calm Your emotional tone as a parent will do very very much to setting the emotional tone for your kids They tend to be little emotional mirrors Have you notice this? So, and they're not very good yet because of their development

They're not very good at regulating their own affect So, having a parent who's able to do that and model it You regulate your own affect An affect just means emotion or mood So that they see a good example of staying calm when things get tough