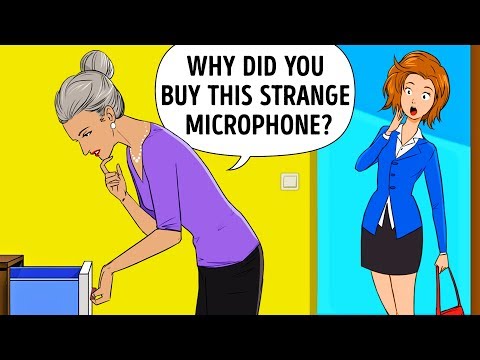 Listen up! Here are ten traits of toxic parents who ruin their kid's lives Psychologists and child behavior specialists can differentiate ungrateful kids from those who have been victims of a toxic influence

For example, clinical psychologist Seth Meyers and Preston Ni explain how the actions of some parents can ruin the lives of their children Now, first of all, it's worth mentioning that raising children is very difficult, and no one has the right to judge someone's particular parenting style But there's a fine line between mistakes that parents make and the inappropriate behavior of toxic, or, in other words, narcissistic parents This video will help you find out what actually affects a child's psyche, and teach those who have toxic parents how they can deal with this issue Before we specify the main traits of toxic parents, let's talk about the effect they have on their kids

When raised by narcissistic parents, children don't feel loved, heard, or seen; believe that how they look is more important than who they really are as a person; don't feel support when they try to develop their true self don't know how to trust suffer from slowed-down emotional development or none at all have a constant nagging feeling of not being good enough throughout their whole life; don't have role models to teach them how to connect emotionally; have difficulties becoming independent from their parents when they grow up; will most likely suffer from depression, anxiety, or post-traumatic stress disorder when they become adults; will most likely grow up into an adult that's either a self saboteur or a person ready to sacrifice everything to achieve high goals These are just some consequences narcissistic parenting can have on kids Now, let's take a closer look at the traits of those who bring their children up in a toxic environment Counting down from number 10: Fear me, yet love me For toxic parents, an emotional attack is synonymous with love and attention

In such families, kids can immediately tell what mood their parents are in by the sound of dropped keys, or the scrape of footsteps on the porch These children live in constant fear and apprehension Toxic parents like this often get offended if their kind actions are treated with suspicion They claim, "I've done everything for you, "yet you're still so ungrateful" Number 9: You need to deal with adult problems, but you still have no rights

In toxic families, parents share the responsibilities with their children For example, these kids probably believe that it's specifically their bad behavior that makes their father abuse alcohol to calm himself down Later, children will even get dragged into adult scandals They'll grow up into teenagers forced to listen to their parents' complaints, adjust to a complicated situation, put themselves in their parents' shoes, and help tolerate and console them Sadly though, even in these cases, kids have no right to express their opinion

Number 8: Be the best, but don't forget that you're not special Narcissistic parents expect their children to perform at the highest level More often than not, they're just trying to overcompensate for their own failures Whether they wanted to build a prestigious career or dreamed of becoming a professional athlete, they lacked some qualities necessary to succeed in these activities However, even if their kid performs much better than they did once upon a time, all of the child's achievements are taken for granted

Belittling comments can truly ruin a kid's life because it makes them grow up believing that they're a permanent disappointment to their parents Number 7: Open up to me, but don't be surprised by ridicule Toxic parents force their children to be sincere, and sometimes even make them feel guilty if they don't want to share their feelings Later, though, that same personal information is used against the kids For example, the parents might not see anything wrong whatsoever in telling all the relatives, neighbors, and family friends that deeply sensitive information the child was pressured into disclosing

Or, perhaps, a kid gives their parents an opportunity to yell at them or react sarcastically to whatever they've opened up about Number 6: You're bad, so don't even bother trying to become better The lower a child's self-esteem is, the easier it is to control them Therefore, toxic parents eagerly discuss their child's failures and flaws In most cases, they also comment on their child's appearance because it's one of the touchiest subjects for teenagers and even younger kids

If there are no obvious flaws, they just make them up They might even make unfavorable comparisons between their son or daughter and the children of their friends, neighbors, or coworkers These types of parents instill an inferiority complex in their kids since they don't want to see their kid try new things and succeed Their narcissistic self-love generates fear at the thought of their child becoming better, smarter, and more successful than they are In other words, their own self-esteem is challenged so they try to keep their children down, too

Number 5: You can be successful, but only if there's something in it for me Or course, these parents do want their kids to succeed, just as long as it benefits them personally For example, they expect their kid to build a successful career, but only in a field they've given their stamp of approval When it comes down to it, a narcissistic parent will get excited about their child's achievements for two reasons only: They enjoy boasting about their kids' success so that others envy them, and a successful child is a guaranteed better life for parents And even if their kid truly feels satisfaction with his job, if it doesn't meet those two criteria, his toxic parents will incessantly discourage him, and they don't even care if he's found personal success and happiness

Number 4: Do exactly what I say, but it's your fault if you fail In this case, parents treat their child like an object They make all the plans, and expect their kids to follow along Oh, and they're not too worried about the consequences of having total control all the time If something goes wrong, it's not their fault, of course: it's their kid's blundering mistake

Number 3: You're such an inconvenience, but don't leave me alone In healthy families, parents encourage their kids to move out and live their own life Toxic parents, on the other hand, never want to let their kids go Yet they're always pointing out that the house, the money, and the food belongs to them Any options or objections from their grown children are completely ignored

And, what do these parents really want? Their secret desire is to make their obedient children stay by their side Number 2: Accept our help, but stop exploiting us These parents seem to generously offer something that their children don't really need, but any refusal causes resentment A grown kid starts thinking, "My parents probably just want some company and want to feel needed," so they accept the help, thank the parents, and offer something in return But there's no happy ending here because the parents will always remind their children of that favor they did for them

The kids turn into prisoners in either case If they refuse their parents' help, they're "ungrateful brats" If they accept, they'll always be made to feel indebted So it's basically a catch 22 for the kids, and a win-win for the parents Typical narcissistic behavior

Number 1: Trust me, but I'm still gonna go through your stuff A private life? Personal space? Neither exist for children of toxic parents If you try to restrict access to your personal territory, your parents accuse you of distrust and even hiding something illegal or immoral As for grown children with their own families, they're not safe, either, since these types of parents just use a spare set of keys And then comes the sea of intrusive questions: "Why did you buy a new dining table?" "How much did it cost?" "What did you do with the old one?" "Why didn't you ask us first?" And the list goes on and on

And on Such parents have no respect for the lives and personal decisions of their kids How To Handle A Toxic Parent It's pretty difficult, even for adults, to get rid of a toxic atmosphere Nevertheless, specialists have come up with some tips that can help you protect your personal boundaries and save a relationship First, you have to realize the following facts: You can't change the past

A toxic relationship is like a chronic disease: it's almost impossible to cure, but you can sort of "treat" the symptoms We don't pick our parents, and we can't really change them The only thing we can change is our reaction to their actions Remember that if you feel anger towards them, this will push you back into an unbalanced parent-child relationship These recommendations are based on the mutual understanding that each person has their own rights and needs that they shouldn't be ashamed of

You have the right to: • Live in your own house and have your own rules • Take no part in resolving issues of other relatives • Limit access to your personal territory • Build up your own experience instead of going on your parents' "I know better" • Manage your resources: money, time, and effort

• Choose your personal interests over those of your parents And don't forget that these rules apply to both parties Children shouldn't cut their parents out of their lives unfairly, or take their help for granted So, what was it like for you growing up? Did you get along with your parents? Tell us in the comments below And don't forget to click subscribe to stay on the bright side of life

Comments transcribed by: A Spence