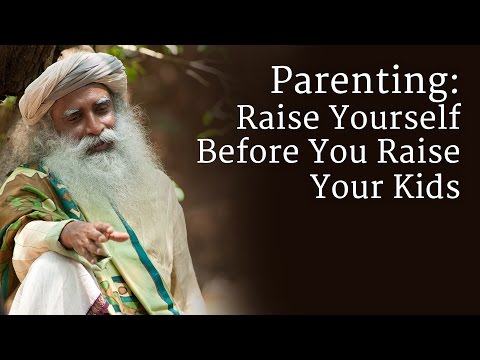 Can you give us some perspective about something that we should think while making a decision or not making a decision for the kids? Sadhguru: Why are you making all the decisions for them? Questioner: (Laughs) That’s the trouble I am sure that I am not the right person to make the decision, but should that be made or not like what do I do when I need to do something? Sadhguru: First thing, we need to understand is children only come through you, they don’t come from you They are not your property to be conducted whichever way you feel fit No, they are not If you treat them as your property or your future investment – if you treat them as such, you are committing a certain sacrilege against Creation and the Creator for which there will be a price

Simply it’ll come in the form of life or maybe it’ll come in the form of your children – the price Yes, it’ll be very unfortunate to see that I am saying this – a very cruel thing to say to any parent, but I am saying this because it’s a very cruel thing to parent a child The child doesn’t need that, but please see in so many ways, you’re doing everything possible to see that he remains dependent on you in some way or the other You are not thinking of liberating him

So, the moment you start working, you want your children to be attached to you, isn’t it? Well, you yourself open Bhagavat Gita and read and say ‘You should not be attached, you should not be attached’, you tell your wife ‘See don’t be attached to me But your children, you want them attached to you So before you choose to have children, you must think about these things but if already it’s happened, now… at least now you must think about it properly, seriously One thing is if you want to produce something little better than yourself to the world, hmm? It’s important? If you produce a child, it must be at least one step better than you, isn’t it? If the same nonsense is going to happen once again, what’s the point? So, something better than you has to happen means the first and most fundamental thing is you are one hundred percent straight – even if it is embarrassingly straight, you’re one hundred percent straight is important This is something very hard for most parents because that’s the only place where they get to boss around They have a committed audience in their children

Wherever else they speak, nobody will listen to them, children till they become twelve years of age thirteen is dangerous till they become twelve years of age you have a committed audience You are losing that also, many of you much earlier, isn’t it? (Laughs) Yes, much earlier you’re losing it So how old are they? Hmm? Questioner: Four Sadhguru: Okay, there’s enough room for correction (Laughs) You must do this – stop parenting them

What they need is some good company, not a bloody boss walking around in the house Yes or no? When you were growing up, did you like it, being talked down to? Did you like it? No So what they need is a friend, they don’t need a bloody father and mother That job is already done Fathering somebody, mothering somebody means biologically delivering them – that’s been done

Now they’re trying to become a life by themselves – what they need is a friend The only qualification you have against them or over them is you came here a few years earlier than them – that’s all you have What else do you have, I am asking? Are you sure you are more intelligent than your child? Are you sure? Hmm? What? Participant: We are sure we are not Sadhguru: Yes So the most important thing you need to understand, just you came here a few years earlier than them All you have done is a few years earlier you landed here – beyond that, you have no other qualification to tell them what to do and what not to do

Yes or no? But, the other consideration is, if you don’t tell them somebody else unqualified advice on the street will happen You only have to guard them against that but if you have to guard them against that, that you must have the courage to bring them up in such a way that they don’t take any advice from you either You say “What I say, you must listen, but don’t listen to your friend He is telling you take a drug, don’t listen to him” But what the friend says seems to be more of a pleasure than the nonsense that you’re talking about

That’s a fact, isn’t it? So, it’s not going to work If you bring up your child with a such a fierce sense of his own intelligence and his own decisions, then you will see, he will seek help because he will very easily realize that his intelligence, his understanding is not good enough for everything But if you bring him up that he has to listen to your advice, he will come up with rebelliousness Even when good things are said, he won't do that – he will do the reverse of it This is something that most parents are experiencing, isn’t it? He wants to do just the reverse of it, just to feel independent because he doesn’t know what it means to be independent So, four is not bad

Yes? That too you did not think about all these things – out of your own compulsions, you do something and they land up Yes? So understanding that a child is not your making, it’s a privilege they come through you enjoy the privilege, cherish the privilege, respect the privilege Do not abuse the privilege that’s been given to you It’s very important Why are you brought up this or that? You are supposed to grow up as a human being, isn’t it? It is just that most people never create an atmosphere for people to grow, they’re brought up the way you want them to be, not the way they should be as life

If you are not ramming up nonsense into their head, they have a tremendous sense of observation and observation naturally pops up a million questions You answer as many questions as you can the way you know it What you don’t know you just tell them ‘I don’t know My only problem is I came a few years earlier than you this doesn’t mean I know everything’ Admit it to your children, what’s the problem? Yes? You think they can’t read, you’re not even bloody sincere about things that you’re saying

You think they can't see it? If you think they can’t see it, I want you to know by the time they are ten – twelve, thirteen, if they have some problem within them, they don’t come to you, they go to their friends Why? Because they feel they’re more sincere than you No other reason Yes or no? You are acting like you’ll drop from heaven Who wants to listen to your nonsense unless they are so bloody brainwashed by the time they are ten-twelve

Rest, leave them free If you think they will anyway go wrong that must be your own self-knowledge (Laughs) You are so sure of yourself ‘My children bound to go wrong’ (Laughs) Just protect them from you have to protect them a little bit from wrong influences, but at the same time, they must remain free of your influence, which is also a bad influence I am saying if you show that what you’re doing is of real worth and you’re willing to invest your life in that, why would your children not invest their life in it? If you don’t show that commitment if you do not show that involvement with life and you’re expecting them to become wonderful whatever no, it will not happen and they don’t listen to what rubbish you say

They’re observing what you do and how you are, isn’t it? So, if you want to raise children, please raise yourself – don’t worry about the children just raise yourself into a wonderful human being, make yourself that, it will reflect It cannot go wrong, but there’s no guarantee (Laughter) Like in… everything in life, there’s no guarantee because there may be some other stronger influence on the street side, isn’t it? (Laughs)