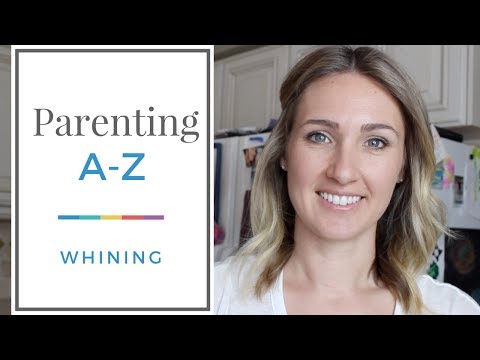 Hey hey, my friend! Welcome to Parenting A-to-Z! I'm Kelly Bourne and this week we're digging right into whining! How to deal when our kids whine We're gonna look at why they whine in the first place, I've got a little 3-step system you can use in the moment to deal with your kids whining, and then some proactive steps you can take moving forward to lessen the amount of whining you're finding yourself dealing with on a daily basis

Cuz man, it's like nails on a chalkboard sometimes, right?! It can drive you a little bit batty! So grab your cup of coffee and we'll get right to it! Oh man! Whining can be so hard to deal with! It can just grate That voice, it can just grate And it's not only the voice, it's that feeling of kind of being manipulated Like they're only doing this to get what they want And guess what?! Nine times out of ten, that's exactly what they're "using" the whining for

It's just really a means to an end for them, because they've learned somewhere along the line that if I use this voice and if I don't let up, mum and dad are gonna cave They're gonna cave It's all gonna come falling right into my hands I know, our kids are little geniuses! They really are little geniuses So when it comes to squashing the whining, it's just keeping that in mind

That when our kids are doing this, all they're really doing is taking a misguided way to get to get their goal met, whatever it is If they want something, or if they need something, or if they want to talk to you, whatever it is, whining is their ticket to getting what they want So for us, it's just helping them get what they want through cooperative means and then they'll leave the whining in the dust Cuz it'll no longer be useful So that's our main job if we want to get rid of the whining

We need it to stop being useful for our kids So the way that I like to deal with this is kind of like a three-part system So right off the top, when you find yourself first dealing with whining, like this is a really new onset behaviour, first and foremost — just validate what they're after So yeah, "you know what, you're really disappointed about that" or "You really wanted that candy" Just validate whatever it is they're asking for

And then in the second breath, the thing that I like to tack on is, "You know what? I can see you're really frustrated, but I just I can't understand what you're asking me?" Not letting the whining have that power for them getting what they want So you're noticing, you're aware that what they're after, whatever it is they're after, but you are not willing to let the whining be the means to the end for them So that's really the first thing when you start noticing that behaviour Noticing, acknowledging, validating, while also pumping the brakes and being like, "I can see you really you're after something, you need something, I really want to help you, but I can't, I'm sorry I can't understand what you're saying

Is there another way you could ask me?" or "I really want to help you Can you help me out by asking in a different way?" Just kind of sending the message that that voice isn't going to work for you And as effective as that is, because really, it does work at least for our family about nine times out of ten at getting them to go back to using their regular voice, sometimes it doesn't And sometimes they're really relentless And sometimes they don't want to give up

And sometimes they're just seeing if they can get what they want using this whiny voice And the key there is just to not notice it Pay it no mind And I don't mean totally ignoring your child, of course not, I just mean not noticing the whining You can excuse yourself to go to another room and say "Can you use your regular voice, bud? Or should I go to another room?" I will even say to my kids, "That voice is really hurting my ears, so come come see me when you're ready to talk

I'm sorry, it's just hurting me" Because the thing is, when we're constantly addressing the whining, if we're, "Stop whining! I told you just stop whining!" The more we address it, the more it works Because the more attention they're getting, the more they're seeing like, okay, when I do this I have the full attention of mom or dad or grandma or whoever they're using it on If they're persisting, that's fine We just also need to persist

"But yet, she persisted!" We need to persist in the face of our kids' whining And that can be just not noticing it, it can be tuning out the whining, it can be even excusing yourself to another room Just because our kids want to use that voice doesn't mean we have to listen to it And it also doesn't mean we need to be a jerk about it either! So if you need to excuse yourself, excuse yourself! There's nothing wrong with that at all And then eventually they will see, they will absolutely see, that okay, I'm trying this, I'm trying this, I'm trying this — it's not working

So they'll drop it Because all of us, even even us as adults, we're all goal-directed If we are trying something and it's not getting us what we want, we'll drop the behaviour And it's the exact same with whining So those three are really great tools that you can use in the moment

But there are also some really good back pocket strategies you can use proactively, on the daily, when your kids aren't whining, that will also help lessen the amount and severity of their whining And the first thing is just to kind of have an awareness, just to kind of notice where our attention has been Because whining generally is an attention-seeking behaviour It's their way of getting us to pay attention So just taking a look at what that looks like for yourself, how attentive have you been

Have you been distracted? Have you been overwhelmed? Or are you stressed with something else? Look at what's going on with you in your life and how much one-on-one time you have had with your kids And just stepping back a bit and seeing, am I giving my full attention? And that doesn't mean you have to be giving it 24/7, but when you're with them, are you with them? Or are you distracted by other things? So just paying attention to that for yourself and then making changes where you need to make changes If it is setting aside one-on-one time for each kid, or having special reading time, whatever it is, just notice that for you If you need to kind of have a little check-in If you need to have a check-in with your kids and have some more quality one-on-one time

Another big one, too, is starting to teach our kids assertiveness skills When you start to notice this whining, when you start to notice them trying to win your attention, or get what they want using whining, that's a great opportunity to kind of harness it and teach them those skills To know how to ask for what they want in a polite, respectful way So sometimes it's just a little bit of coaching And one way you can do that, is just by giving them the language

" or "I wish I could" or "I wanted to stay later and play at the park" Just giving them that language So whatever it is they're whining about, give them the tools, give them the option of what they could be saying instead Because the more we can teach them, and the more we can equip them with that language, the more they're gonna be able to use it They're not gonna magically know how to tell us they're disappointed, or tell us they're frustrated, or ask politely for something, if we don't first show them the ropes

So just saying like, "Yeah, sure thing! No problem!" or "Thank you! It's a pleasure when you when you ask so politely for things Of course I would love to get that for you" Just really catching them in the act, whenever they are using those behaviours Because sometimes we can just forget sometimes We can take those polite behaviours for granted

We can focus in on the negative It's like it's like a trigger when they're rude, or they start whining, where we feel like we need to jump in and teach Whereas if we can embrace those moments where they're already shining, where they're already showing strength, we'll just start to see more of it It's just the positive hamster wheel The more we notice the good, the more good we'll get

So just keep that in mind So I know, guys whining can be really tricky to deal with, but the key is just to acknowledge what your kids are after while also holding firm on that boundary that that whining voice is not gonna get them whatever it is they need, while also giving them the tools, and giving them the language, and coaching them through how to ask for what they want in a really assertive way So I hope that helps, guys! Of course, leave any questions or comments below, I always love chatting with you! If you're looking for any more in-depth parenting resources or support, don't forget to check us out in the Parent 'Hood! I hold weekly office hours so we can chat and you can ask questions one-on-one, and give some really good tips and tools you can run with So good luck guys! Let me know how it goes, and I'll see you in the next video!