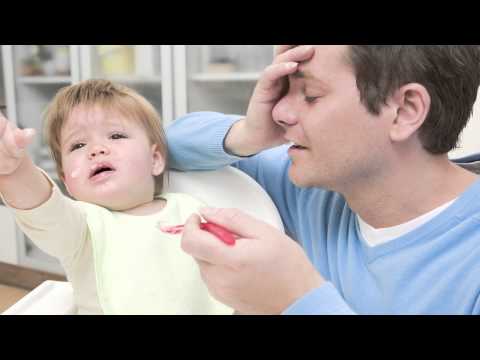 (piano music) – I think fear is an important component in the developing relationship between a parent and an infant If you can imagine being a young, perhaps professional person being in charge of your life, and then suddenly having a very vulnerable little baby to look after, which doesn't come with a manual, which you have to figure out on your own

It's a very frightening prospect for all of us, and it's a very important job In fact, many people feel it's the most important job that they do Many of us have been educated in a means of when we read something and study it, then we know it, and we can do it But there's no manual to read There's nothing to study, and we're supposed to do a job in a manner of which is reading cues, and listening to our feelings, and observing the baby

These are not skills that we've grown up to do Many of us grew up in families that didn't have lots of children, as was the habit several generations ago, so we didn't see our mothers mothering a little baby We didn't have little cousins, and nieces, and nephews around who we could practice on when we were younger, and so we're thrown into a job that we have absolutely no training for And yes, it is a very frightening task to take on The baby will let you know very quickly when things are not going well, especially if you, unfortunately, have one of the 20% of infants that have a rather difficult temperament

They'll be very ready to let you know when things aren't right, which then only makes the mother feel, "I can't do this, this is a terrible job, "what have I undertaken, "who's going to help me, "what do I do next, "nobody will understand, "they'll think I'm terrible" So the cycle of difficulties carries on The infant can't reassure the parent The parent feels rather hopeless about this very difficult task, then starts wishing and hoping that someone would help or wishing they hadn't undertaken the job and feeling rather in a bad spot with no assistance It's very common for parents of newborn infants to feel very uncertain about the job that they're doing

They're hoping and expecting that their baby will smile and give them some reassurance that they're doing a good job, but the reassurance they're getting is that their baby is growing, and sleeping, and eating, and pooping, and peeing Their baby is not that capable yet of giving them a smile, a nod, a thank you, and it takes months and months for that kind of feedback to be given to the parents Unfortunately, the goodies that they're getting, which is that the baby's growing and developing, is not something that's so aptly seen