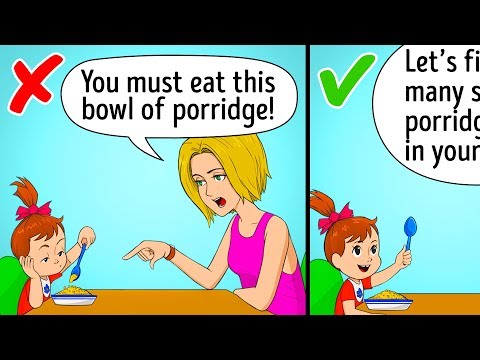 Seven tips from experienced parents on how to deal with a naughty child Oops didn't somebody say pepper spray? No hmm

I didn't think so It goes without saying that you need to find a unique approach to raising any child But there are some golden rules that will help you deal with even the most disobedient ones In their work— game theory for parents—- writers and experienced fathers , Paul Rayburn and Kevin Zollman explain how you can get your kids to behave better and to do what they're told in all kinds of situations No shouting, no threatening, no drama at all Yeah, let's see what their secret is

When they refuse to walk with their parents Now every parent has probably faced the situation when their child stopped in the middle of the street, refused to hold their hand and basically just wouldn't budge To convince a child to keep walking , try switching roles with them If you need to cross the road for example act like you're afraid to do it on your own Let the child play the role of the parent and you'll see that they'll Immediately get into the game and do what you want them to do There's another way out: give your kid a choice , either they hold your hand or go in the stroller In most cases, your kid will readily take your hand When they won't accept punishment for bad behavior So what should you do if your child has misbehaved, but isn't ready to face the music Simply talk to them like you would if you were talking to an adult Calmly explain why they're guilty and why they're going to be punished you can make a business proposal like Suggesting that they should either pay a fine from their piggy bank, or do the dishes for the next week Let them have the right to choose even when they make mistakes Now please keep in mind that emotional abuse is never the right way out So instead of making your child stand in the corner for a long time Open up a dialogue and figure out together how their mistake can be fixed When they refuse to eat their meal, but demand junk food If a child refuses to eat lunch But wants their favorite sugary stuff instead offer them dessert as a prize for cleaning up their plate This tip works extremely well if your kid is competitive in this case they'll put all their effort into eating their meal as fast as possible to enjoy the sweet prize after work Don't get frustrated simply try to find compromises Children are more likely to cooperate if you offer them a good deal It sounds like most adults I know

When they won't eat their breakfast If this is a case Try to set an example when parents are too busy in the morning and the child has to have breakfast by themselves It's no wonder They might leave most of the food on their plate If your kid refuses to have breakfast ,keep them company to make it more fun ,suggest they count how many spoonfuls of cereal are left you can be sure that doing this they won't even notice that they've eaten the whole bowl Now there are several other options that can make your little one eager to enjoy their morning meal For instance try breakfast on a stick you just need a few wooden skewers and pieces of waffle different fruit chunks and berries Kids have fun stabbing their food with sticks, and this turns any old boring fork and knife breakfast into a cool game Plus they'll gobble up this healthy food lickety-split for added fun, offer them a bowl of yogurt to dip their breakfast kabobs in You can also make it a bedtime tradition to ask your kid what they want for breakfast the next day In this way, there won't be any unpleasant surprises or unnecessary fighting in the morning When they refuse to get dressed Mornings are hectic for parents especially if their kids are school-aged You got to get them up and dressed, have breakfast and school lunch is ready And all of this before the bus arrives It's got to be fast and efficient, but a child that refuses to get out of bed puts a huge kink in the morning machine Most kids simply don't understand how urgent this routine is

they might choose to play with their toys instead of putting on clothes But shouting and threatening only wastes your precious time and get you nowhere It's easier to avoid the drama and turn it into fun Seeing a pattern here yet If the kids refuse to get dressed , try a challenging game Tell them you want to see if they can put their clothes on blindfolded Children love to play so it's likely that this way, the process will go much faster with no hiccups And who knows, maybe the next morning, they'll ask you to cover their eyes while they're getting dressed again You can also play the matching game

You choose a color and the children need to find clothes that match When they don't want to stop playing in order to get ready for bed It must be hard for kids to switch from a fun activity to a much less entertaining one That's why the moment you ask them to put away their toys Or games and go take a bath or come to the dinner table, well, more often than not a tantrum ensues In this case you can play follow-the-leader You be the leader and your little one must follow But you have to make it fun Walk in a weird way , make sudden jumps and hops that your child must repeat If the kid decides to lead, let them do it In this case , they won't even notice the transition from playtime to some routine activity When they're misbehaving in the car Long hours on the road are ten times more boring for kids than they are for adults So it's no wonder they start nagging and fighting with their siblings Boy, I remember such car trips where my two little boys would be debating "idiot " "big fat peg" "idiot" "big fat pig" Well before you lose your cool and just add to the drama, try playing the fake dreams game with them Tell everybody in the car, except for the driver, of course , to close their eyes and make up a dream that they see After the stories are ready Everybody takes turns sharing their story

If you're lucky enough one or all of the kids drift into real dreamland You can find tons of other fun car games on the Internet They'll definitely entertain your kids on a road trip while giving you some peace of mind as well So those were just some examples of how to bring children up , using compromises and games instead of shouting and threatening All in all here, are the main guidelines to follow if you want to avoid conflicts with the kids Play nice Even the smallest children understand what Fair Play is That's why you can address the issue of fairness when you want to encourage Children to behave well However, it goes without saying that if you decide to use this method you need to play fair yourself Teach your children to cooperate in A 2008 study, a group of four-year olds 10 boys and 10 girls were each given a doll and something that this doll could give away like a plastic fruit, a piece of candy, a toy and so on The dolls which represented the kids themselves, had to share the things they had with other dolls that were introduced to the children as family members friends or just strangers It turned out that even at such a young age Kids knew the rules of cooperation They gave more presents to family members than to friends and next to nothing to strangers You simply need to explain to your kids Why it would be better for them to play along, and they'll understand this When the situation makes sense for children, they're ready to cooperate So do you use any creative methods to dealing with your children's bad behavior? I've used duct tape several times

Seems to work If you don't have kids, which tips would you use if you did? Tell us in the comments below and hit the like button We have so many more funny useful and informative videos on the bright side So if you haven't joined us yet, click that red subscribe button