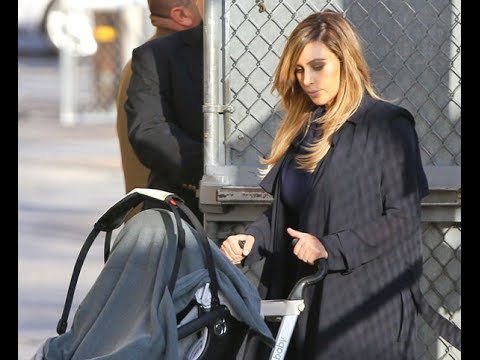 Hi everybody, I'm Melissa, welcome back to CloudMomcom

Thank you so much for watching Reacting today to the latest piece of news about new mom, Kim Kardashian, who has lashed out on Twitter criticizing a follower for criticizing her about the time that she spends with her baby and here's what Kim said that people have been reacting to and I want to give my sort of mom reaction "You sound so ignorant because I don't tweet or Instagram my every move with my daughter, means I'm not with her 24/7, we share what we want, or is it because I go support my fiance at every show and I post pics When the baby goes down for bed or a nap, parents are allowed to work and support each other, maybe even have fun too" Okay, so like many people I sort of reacted to this and largely in the context of having seen other photos of Kim since she had her baby including the, the one where she's in the bikini, the selfie

Wow, but here's sort of my reaction to this Number one, I do think and I always come back to this, that it is so easy for us to judge moms, and especially celebrity moms and other moms for any sort of decisions that they make that seem different from what we ourselves did and I have no idea what it's like to be Kim Kardashian but I can imagine that she has babysitters I have babysitters, they help me get my kids around to where they need to be in the afternoon I don't think that makes me a bad mom I don't judge that for me now as a mom or for a mom with a young baby

So that's just to start, but as we look at this more, you're looking at a baby that's five months old and I'm actually in the process of filming a video on this feeding and sleeping schedules for babies this age Here is what my babies were doing at five months I was feeding, so whether you're feeding or nursing this is what you're in, four times a day, and doing still a top off feed at 11 at night And then that was hopefully getting my baby through till six or seven in the morning when I would wake up to nurse the baby again Okay, so here's the thing, when you're a mom doing all of those things and you have a five month old baby, whether you're working or not working you're pretty exhausted, you're pretty tired, this is still an incredibly tough and draining time for most women, whether they have help or not

And I think what's going on here and what people are objecting to is that they don't see any of those sort of new mom moments coming from you Kim So its not that they don't doubt that you love your baby, and you spend time with your baby but they don't see any of that, so it's sort of hard for them to grapple with because it's so different from their own experience And so what I would say is, rather than lash out maybe you should take the positive route like you did by tweeting and saying you took your daughter swimming I think that's really cute, maybe snap a photo of yourself so you can look as pretty as always but you're wearing yoga pants so you're sort of vegging at home the way most people do when they have a new baby and I think people can relate to that a lot more than these really sexy pictures And here's the other thing I think people are thinking, and this is just me talking aloud but this is what I thought

When I had my babies, especially the first and it was the same with each baby that came after that, it was such a completely monumental experience for me It changed me so much, it changed my outlook of the world so much It changed the way I saw myself In some ways even though I might not have looked this good, I actually felt better about myself because I realized it wasn't as important as what I had thought I worried less about my weight or what I looked like or what I was wearing because I felt so blessed to have this beautiful baby and the baby in fact became much more my mission in life than myself

So I think that's what people are waiting to see Are you going through that? Are you having an experience like that?' And maybe that's not the kind of thing you wanna share but I think that's what people are reacting to, because they don't see that displayed in all these social media images They just see the same old Kim Maybe you think people want you to be that, but maybe they're ready to see a little bit of growth here and we've seen that in other celebrities, like I'll mention Madonna, one of my favorites So that's kind of what I think is going on with this controversy

Please weigh in, do you guys think Kim Kardashian went too far in lashing out at this follower? What do you think of the way that she portrays herself in social media? Do you think that it's something that offends you and why? I would love to hear what you think, all in the spirit of being non-judgmental and thank you so much for watching CloudMomcom